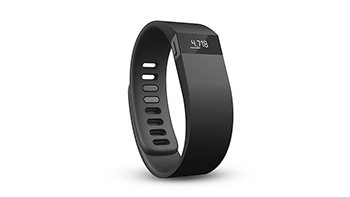 See your Stats, Push yourself Further with Force

A powerful Force for everyday fitness, this advanced, high-performance wristband is with you all the time, motivating you to be more active. Force has an OLED display that offers you real-time stats right on your wrist. You can track steps taken, distance traveled, calories burned, stairs climbed, active minutes and the time throughout the day. Force also monitors your sleep and can wake you with a silent alarm. Wirelessly and automatically sync your stats to smartphones and computers to make it easy to see your trends over time. Set you fitness goals, then beat them with Force.

Designed to be easy-to-wear and lightweight. Force is water resistant and can withstand event the sweatiest of workouts. Plus, it has a battery life of 7-10 days, so you can wear it all day and night. Fitbit Force is available in two timeless colors, Black and Slate, and two sizes, Small and Large. Click here to find the perfect size for you.

What’s in the Box

Track it, See it, Beat it

Track all the fitness stats you need to reach your goals. Force measures your daily activity—steps taken, distance traveled, calories burned, stairs climbed, active minutes, and hours slept. See you stats right on your wrist, then monitor your progress and trends on your computer and smartphone.

Get instant access to up-to-the-minute stats on the OLED display. With fitness stats right on your wrist, you don’t have to look far for motivation to keep moving. Watch your steps taken, distance traveled, calories burned, and active minutes as they happen in real time.

Wear this comfortable wristband at night to track how long and how well you sleep. Then wake peacefully with Silent Wake technology, a vibrating alarm that wakes you at your desired time without disturbing your partner. Sync sleep stats wirelessly to see online graphs and charts that illustrate your sleep patterns over time.

Force stats sync wirelessly to leading smartphones, tablets, and computers, so your progress is always up-to-date without plugging in or draining your battery. Force syncs with iPhones (4S and newer) and select Android devices (Samsung Galaxy III and newer, Note II, and more). Android users simply tap the NFC-enabled Force to a compatible phone to launch the Fitbit app.

Online Tools to Track your Progress

Set goals on your personal dashboard and track your progress through easy-to-read graphs and charts. Use the Fitbit app for iPhone and Android to track steps, distance, calories, stairs climbed, active minutes, and sleep. Stay motivated with ongoing goal progress.

Log food consumption, weight, and additional workouts at Fitbit.com or through the Fitbit app. Bring greater fitness and nutrition into your life—seamlessly, socially, 24 hours a day.